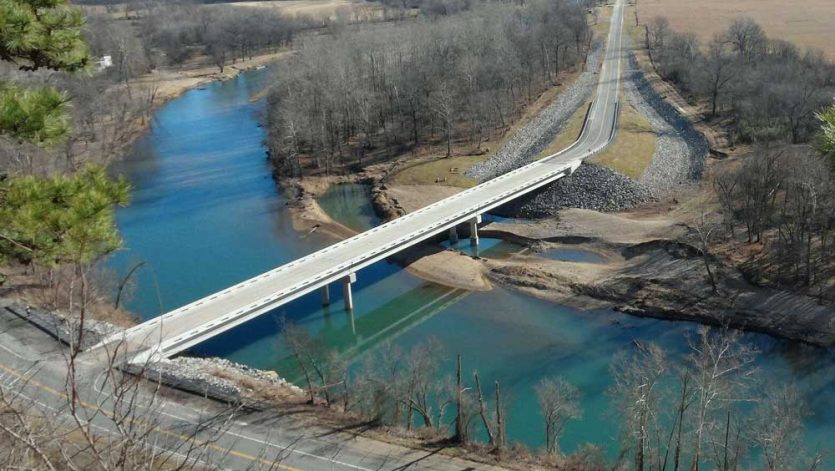 County Road over the Illinois River

The County Road over the Illinois River is located in Cherokee County on Highway 10. Work began on Oklahoma Department of Transportation’s State Aid Project No. CIRB-111C(081)RB in the Spring of 2014. Project Manager, Todd Strande, General Superintendent, Tony Mounce and Superintendent Bo Rowan as well as many hard working field personnel successfully and safely built the project in approximately one year.
The project involved new alignment to replace the old Combs Bridge in Cherokee County, Oklahoma which was originally erected around 1926. Many longtime Cherokee County residents cherished the bridge because it provided a visual connection to the beloved children’s novel, “Where the Red Fern Grows” as it was featured in the opening scene of the movie.
The new bridge was constructed about 2,000 feet downstream from the historic Combs Bridge and consisted of three spans with a total length of 420 feet and bridge beams weighing almost 70 tons each. In addition, 2,500 feet of asphalt roadway was placed.
During erection, Manhattan Road & Bridge faced several challenges. The Army Corp of Engineers has registered the Illinois River as a sensitive body of water so working in and around the river required special precaution. In addition, construction was delayed for five months during the ever popular floating season which brings hundreds of canoers, rafters and kayakers each year. Also, In December 2014, record rain falls caused torrential flooding that put the entire bridge site under water during the construction of the substructure.
The new bridge and road were open by Labor Day of 2015. The newly completed bridge was once again faced with record flooding in January 2016 that tested its strength when water rose to the bottom of the bridge beams.

2016 Pharaoh Award Winner as the Highest Quality Bridge Structure in the State of Oklahoma.