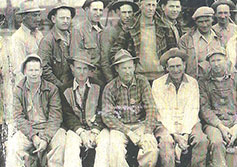 During the next century and beyond, Manhattan Construction Company survived and thrived through the Great Depression, the Dust Bowl, and two World Wars. During World War II, Manhattan completed more than one billion dollars in a military base, hangar, apron, barrack, and other defense mobilization projects for the United States Defense Department. For such achievements during World War II, Manhattan won two coveted Army-Navy “E” awards for excellence.