OKLAHOMA – Oklahoma-based, Manhattan Construction Company has announced a new regional leadership structure with the appointment of 30-year construction veteran Hugh McCoy as senior vice president. He will provide executive management of Manhattan’s offices in Oklahoma and Arkansas. Manhattan also named Larry Rooney as vice president of the Tulsa office, serving Northeastern Oklahoma and Arkansas, and Kevin McKay as operations manager for the Oklahoma City office, which is led by Vice President Mark O’Rear. 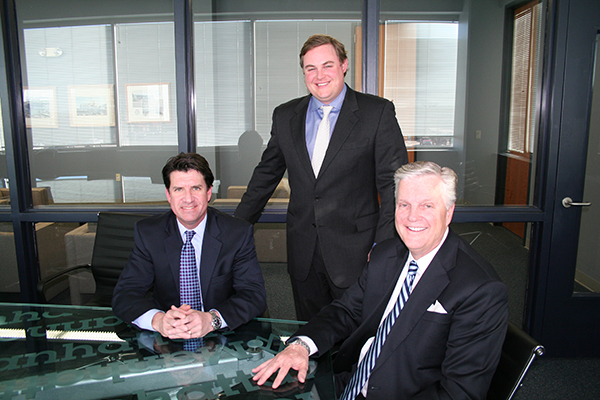 “Hugh is a top-tier builder, who has worked extensively throughout the U.S., including strategic account management and planning for construction and engineering organizations,” said Manhattan Construction Company President John Reyhan. “With Larry taking on leadership of the Tulsa office and Hugh joining the team to manage statewide resources and collaboration between the offices, we are bolstering an already solid operation in preparation for growth.”

Larry Rooney previously served as director of preconstruction in Tulsa and is a fifth generation member of the company’s founding family. Manhattan Construction has been owned by the Rooney family since it was founded in Oklahoma Territory in 1896. It was the first company to incorporate in the State of Oklahoma.

“This investment in our organization’s structure will support Manhattan’s continued growth and is a reflection of our confidence in this State’s future,” said Reyhan. “In a time when companies are retreating, we are investing in people and preparing the organization for the future.”

Prior to joining Manhattan, McCoy was vice president of Reeder Construction. McCoy brings experience in planning, programming, design and construction of major commercial, institutional, industrial/manufacturing and aviation projects throughout the U.S. and abroad. He holds a master’s degree from the College of Architecture, Planning and Design from Kansas State University. He has written and published numerous manuscripts and articles for various technical journals concerning the construction project delivery process.

Rooney’s portfolio of experience includes more than $1.25 billion in construction projects. Originally from Tulsa, he earned a Bachelor of Science in Mechanical Engineering from the University of Notre Dame. After graduating, he spent six years working for Turner Construction in Chicago before joining the family business as an estimator in Manhattan’s Houston office. In 2013, Rooney transferred to his hometown of Tulsa where he served as director of preconstruction. He is an active member of the Tulsa community and serves on the board of the Tulsa Regional Chamber and the advisory board of Tulsa’s American Cancer Society, including serving as a Baron in 2015. He is also a U.S. Green Building Council LEED Accredited Professional (AP) and graduate of Leadership Tulsa Class 51.

“Larry has worked his way up through the building industry in every level of project management, estimating and pre-construction,” said Reyhan. “His depth of experience combined with his personal commitment to the Tulsa community will benefit clients and team members with solid leadership for years to come.”

“We are also eager to welcome Kevin McKay back to Oklahoma as operations manager of our Oklahoma City office after leading our field teams on some of our most high-profile projects in Texas,” said Reyhan.

Prior to joining the Oklahoma City office as operations manager, McKay served as operations manager in the Houston-area office. During McKay’s 33-year career at Manhattan he has worked on more than $2 billion projects across four States, including Oklahoma, Louisiana, Texas and Virginia. He served as the field leader for multiple high-profile projects including AT&T Stadium, home of the Dallas Cowboys, and Texas Rangers Ballpark, home of the Texas Rangers, both in Arlington, Texas; George W. Bush Presidential Center in University Park, Texas; River Center in San Antonio, Texas; New Orleans Sports Arena in Louisiana; and First Baptist Church in downtown Dallas, Texas.

When Laurence H. Rooney founded Manhattan Construction Company in Oklahoma Territory in 1896, he built his business and reputation for trustworthiness and dependability. These timeless values have enabled Manhattan to become one of the most respected construction firms in the nation.  In the last three years Manhattan has received more than 50 industry honors for quality, safety and best company to work for. The company’s services include Builder-Driven Pre-Construction®, construction management, general building, and design-build. The company works in the U.S., Mexico, Central America and the Caribbean. www.manhattanconstruction.com