Houston, Texas – Manhattan Construction Co. placed the final, upper most piece of steel, otherwise known as ‘topping out’, at the Houston Dynamo Stadium on November 14, 2011. The brightly painted orange beam was set into place in the canopy covering the east side of the bowl. The stadium is 45% complete with 5 ½ months to opening day on May, 12, 2012.  The project has been moving at an extremely fast pace since breaking ground March 01, 2011. 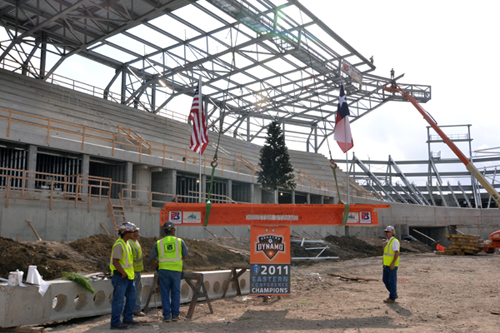 When the stadium is finished it will hold approximately 21,600 fans and will play host to Texas Southern University football games, boxing matches and concerts besides Houston Dynamo Soccer games. Manhattan Construction Co. has 45 subcontractors consisting of more than 200 people working onsite to complete the 34 luxury suites, 1,000 club seats, and overall 22,000 seat stadium. This project is LEED registered with the U.S. Green Building Council.

The Houston Dynamo moved to Houston in 2005. Since then they have won two MLS Championships. Sunday, November 20, 2011 they will complete in their final game for their third MLS Championship.