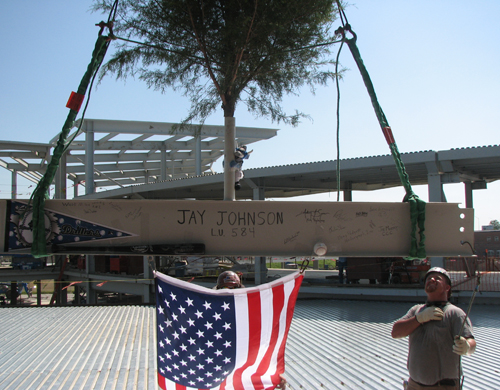 Part of the topping out tradition calls for an evergreen tree to be placed on the beam for good luck. Workers prepare the beam for it’s rise to the top of the structure.

The ceremony, referred to as a “topping out,” marked the placement of the final steel beam at the highest point of the stadium’s structure and recognized Manhattan’s employees, iron workers and subcontractors for their contributions to the new downtown ballpark.

During the ceremony, Manhattan Project Manager Bob Jack commended the project team’s safety achievements, which include completing more than 50,000 work hours without experiencing a single lost work day. This has contributed to the company’s nationwide safety record of nearly two million work hours and over one year with no lost-time incidents. Jack said the volume, complexity and fast-tracked nature of the work at the ballpark makes this perfect safety record even more impressive.

“On behalf of Manhattan, I want to thank our employees and all of our project contractors for their achievements to date,” Jack said. “It’s your efforts that have allowed us to reach today’s milestone. Thanks to you, ONEOK Field is on time and within budget.”

ONEOK Field is located in the historic Greenwood District in downtown Tulsa. The team will move to its new home from Drillers Stadium, which was built in 1981 at the Tulsa State Fairgrounds.

The $60 million stadium is being financed through a partnership of public and private investment. Once complete, ONEOK Field will provide Tulsa and the surrounding communities with an urban entertainment option that will spawn additional business and further bolster Tulsa’s economy.

The Tulsa Drillers are the Double A affiliate of the National League Champion Colorado Rockies and play in the historic Texas League.

Founded in 1896, Manhattan Construction Company ranks among the top three sports facility builders in the nation by Engineering News Record. And, as one of the top 25 general builders in the nation, the company builds projects throughout the Southwest and East regions of the United States, Mexico, Central America and the Caribbean, and provides pre-construction, construction management, general building and design/build services. www.manhattanconstruction.com