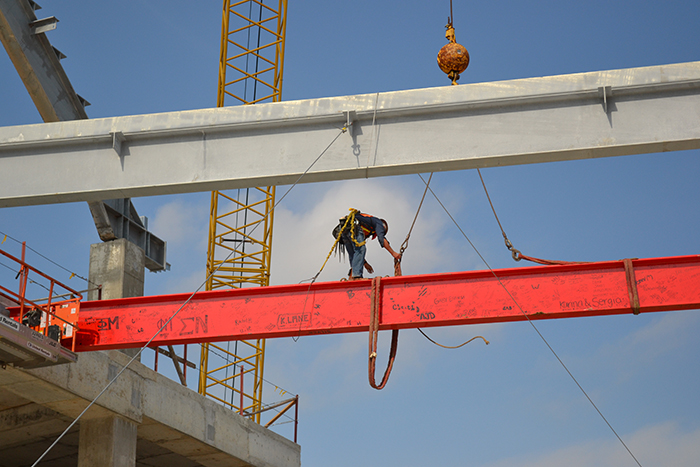 Houston, Texas – Manhattan Construction Company held a “Topping Out” ceremony this week for The University of Houston Stadium project. The ceremony marks the construction milestone of placing the upper most pieces of steel on the stadium’s structure. The event was held on October 28, 2013 at the project site where the steel beams were painted ‘Cougar Red’ and were signed University alumni, supporters and students. They were lifted and placed in the southeast corner of the stadium.

Watch this University of Houston video covering the event:

Manhattan Construction is building The University of Houston Football Stadium project which is a newly constructed continuous bowled 40,000-seat stadium. The south side of the stadium consists of a cast-in-place structure with club space, suites, and a press box with premium seating. Twenty-six suites stretching from end zone to end zone on the stadium’s south side will be located one level above the club. The stadium is designed to include four open-air lower bowl party decks with 24 armchairs and two open-air party suites containing 58 padded armchairs.

For more information about Manhattan, please visit: www.manhattanconstruction.com or connect with us on twitter @ManhattanBuild, via Facebook/ManhattanConstruction and on LinkedIn.