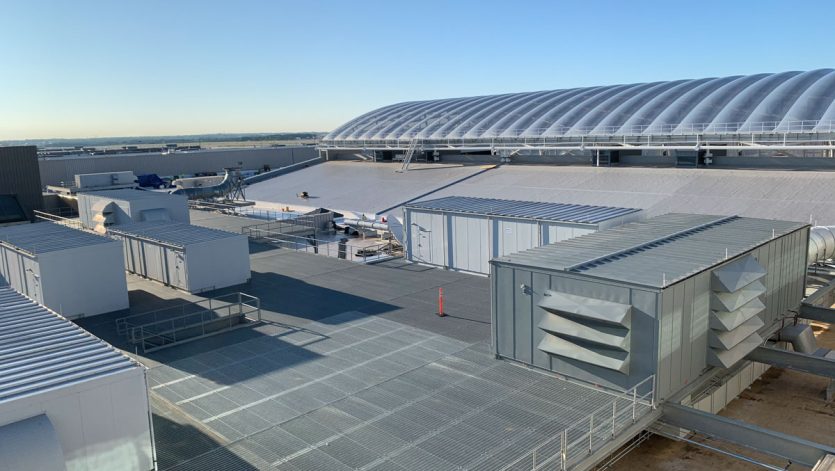 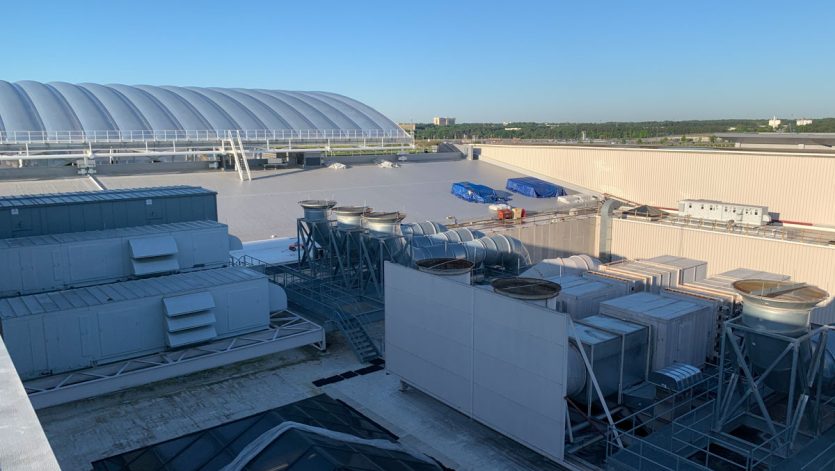 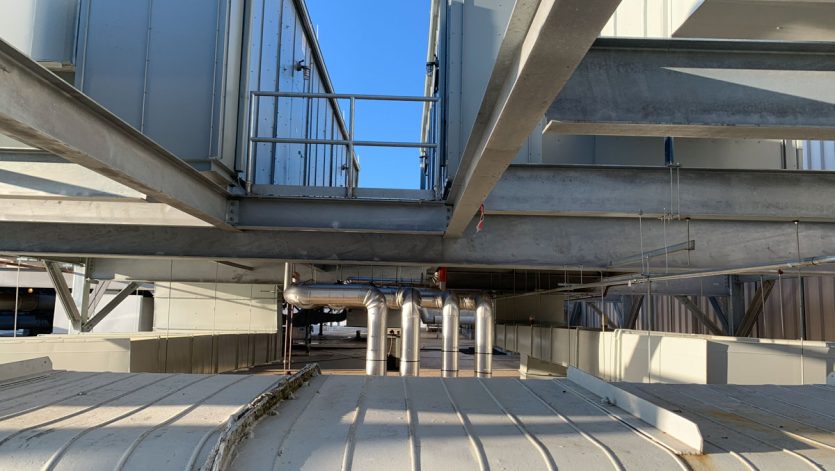 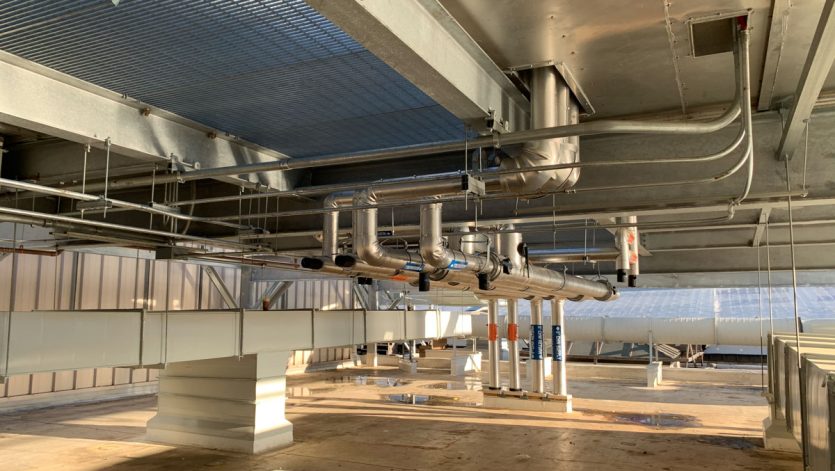 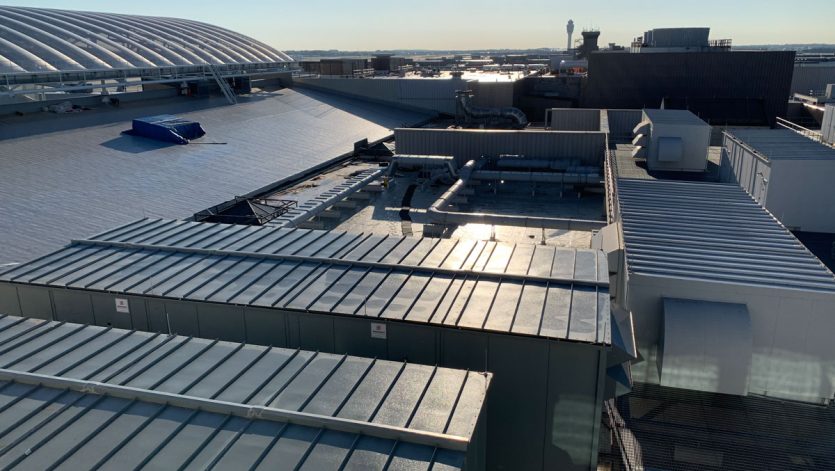 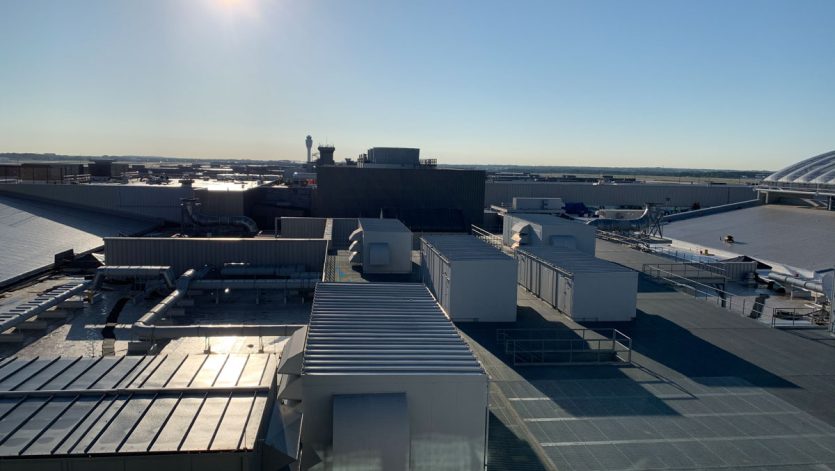 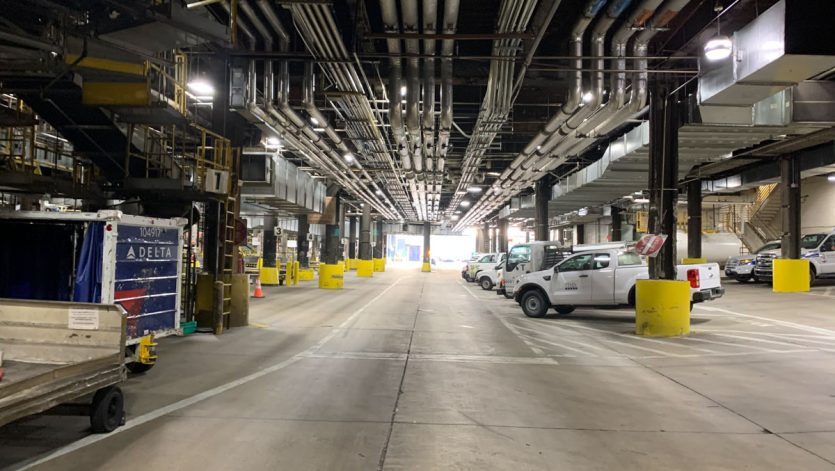 The HJAIA Atrium RMU Replacement project began with changing out the heating/cooling unit serving the concession stores and administration offices. This involved the removal of sections of the ceilings surrounding each unit to be replaced, modifying the plumbing and electrical wiring to allow each unit to be disconnected and replaced with a new variable air volume unit. This work had to be heavily coordinated. Teams would have to survey the above ceiling space and determine new routes for installing new plumbing pipes and electrical wiring to create a seamless switch from the old to the new replacement unit. Each unit had to be up and running and each office space cleared of all construction debris and paraphernalia before the start of each day’s operation.

Following the change out of the old power induction units, the team concentrated on removing and replacing the air handling units on the roof. Due to space limitations working around the terminal building, there were a limited number of key areas where cranes could be placed to aid with lifting materials and equipment on and off the various roof areas. This also impacted the ability to remove and install the new air handlers. The team installed a steel platform gantry system to roll of the old unit and place the new units into position.

The team performed a survey of the building and transferred control lines onto the roof to open pockets within the roof and create a new welded connection to the existing columns and extend these steel columns to form the support for a new gantry system that runs the length of the roof.

Upon completing these new steel gantry platforms, the team could take delivery of each of the air handler units. The units were hoisted onto the edge of the steel gantry near the perimeter of the building and rolled, in some instances, several hundred feet to sit them into their final location. Before delivery, the team had to build and install 36-inch-diameter ductwork piping for the new air handlers, which involved building and attaching a new gantry system to the existing building to accommodate horizontal and vertical piping. This new duct system would eventually connect to the new air handling units.

Once the new units were set in place and built out, each existing air handling unit had to be shut down. The new replacement units were brought online instantaneously to maintain the interior environmental control of the various building zones. The redundant air handler unit was disassembled and rolled off the building using the steel platform to the point where they could finally hoist off the building using cranes.

The team performed intense coordination to ensure construction did not impact the daily operation of the airport administration staff, the concession store, and ultimately the patrons’ comfort while using the facility. The team spent many hours coordinating with different entities to gain access to individual spaces, both to survey the existing conditions, preplan and install enabling works, such as new plumbing lines, electrical wiring, and duct placement to allow units to be disconnected and changed out without the airport experiencing any significant downtown.